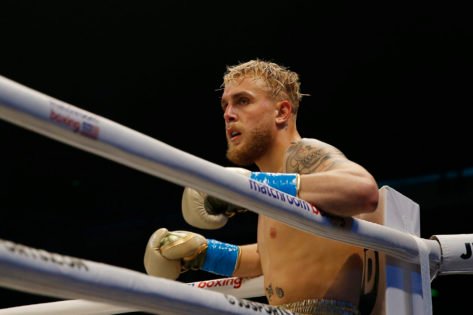 Jake Paul has his attention on the global sports scene and not just boxing. While he mostly offers slurs against fellow boxers, ‘The Problem Child’ has shown love for NFL star Baker Mayfield. It has been a controversial week for Mayfield, who contracted a shoulder injury in the game against Arizona Cardinals.

After landing awkwardly on his shoulder, the NFL star had to depart the field. As he has reportedly suffered a dislocated shoulder, he will remain out of action for a long time. Meanwhile, Jake Paul has offered to massage Baker Mayfield, if the football player needs it.

He wrote, “Someone tell Baker Mayfield if he needs someone to massage his shoulder I’m there.”

Someone tell Baker Mayfield if he needs someone to massage his shoulder I’m there.

It is not the first time Paul has offered to help a fellow athlete. He campaigned actively to improve fighter pay in combat sports.

Paul is currently throwing shots at the three-division world champion Gervonta Davis on Twitter. Amid this, Jake Paul’s post for Baker Mayfield has clearly caught a lot of attention.

Baker Mayfield’s physical setback has already disheartened several people. Meanwhile, Paul may have found ways to attract attention from this situation. Or he may truly want to help the NFL elite, especially as Mayfield plays QB for Cleveland.

What’s next for Jake Paul?

Paul, 4-0, has been on a surging rise in the professional boxing chain. Following wins over MMA elites, he seems ready to take on a pro boxer. Several reports claim that he will face ‘TNT’ Tommy Fury on December 18 in Miami.

MIAMI, FLORIDA – JANUARY 30: Jake Paul celebrates after defeating AnEsonGib in a first round knockout during their fight at Meridian at Island Gardens on January 30, 2020 in Miami, Florida. (Photo by Michael Reaves/Getty Images)

The matchup has been lurking around for several months and can be massive if it comes to life. Paul vs Fury will be a big clash at the Box Office. Thus, ‘The Problem Child’ clearly has pretty big things incoming at this stage.

Will Paul really fight ‘TNT’? Also, do you think Baker Mayfield will respond to him?

“Someone Who Shares the Same Goals”: Elina Svitolina Shares How Relationship With Gael Monfils is Paying-Off

Bots in Battlefield 2042: Good Addition or Destined to fail?