When it comes to lifting incredible amounts of weight, Shahram Saki should get comfortable in the spotlight. The Iranian powerlifter’s latest mark might be his most outstanding strength achievement yet.

On May 12, 2022, Saki shared footage of himself squatting 510 kilograms (1,124.36 pounds) during a training session. While unofficial because it occurred outside of a sanctioned competition, Saki’s figure surpasses Daniel Bell’s current all-time raw w/wraps record of 505 kilograms (1,113.3 pounds). Bell achieved that feat during the 2021 World Raw Powerlifting Federation (WRPF) Kern US Open. Both athletes typically compete in the 120-kilogram-plus division.

[Related: Front Squat Versus Back Squat: Which One Is Best For You?]

Notably, some might find the depth of Saki’s squat questionable. He doesn’t — or barley does — reach the powerlifting competitive standard of below parallel (or getting his hip crease below the plane of his knees). As such, it potentially would not have counted in a full power meet.

It’s been an eventful few weeks for Saki, to say the least.

Here’s a complete record of each of the three sanctioned competitions Saki has under his belt:

Meanwhile, here are Saki’s all-time competition bests. Notably, they are all from the 2022 IranBBF National Classic Powerlifting & Bench Press Championships:

At the time of this writing, Saki has not announced any formal plans for his next sanctioned meet. The main updates that the athlete provides are of him capturing a usually staggering strength accomplishment on his Instagram. His feed has almost entirely consisted of heavy squats in recent weeks, which makes sense with his latest mark.

While Saki’s next competitive appearance is up in the air — for now — there is one thing to note for sure. If he can transfer over this massive squat from training (while getting more depth), he might soon be able to call himself a World Record holder.

3 Methods to Handle the Fable of Good Posture 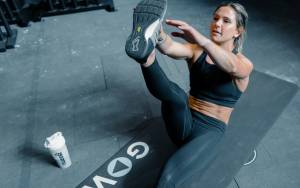 From Coach to Student of Physical Therapy