Team GB has announced that British weightlifters Rebekah Tiler and Sonny Webster will be making their Olympic debut in Rio de Janeiro. Teen sensation Rebekah Tiler is due to compete in the women’s -69kg category, while Sonny Webster, 22, will fly the flag for Great Britain in the men’s -94kg division.

17-year-old Tiler, from Keighley, West Yorkshire, is set to be one of the youngest athletes for Team GB in this Summer’s Olympic Games. She will go as reigning British Champion, having taken two British records at the most recent British championships. She is also the gold medal winner at the Youth Commonwealth Games. Sonny Webster is likewise the current British Champion and finished fifth at the 2014 Commonwealth Games, as well as being an U23 British Record holder.

On her selection for Rio, Tiler commented:

“I am so excited and honoured to be representing Team GB in Rio this summer; it’s a dream come true and something I’ve wanted ever since I got into the sport. The next few weeks of preparation are so important and…I’m 100% focused on ensuring that I’m in the best possible condition heading into Rio.”

“The Olympics is undoubtedly the biggest stage for the sport. I’ve been training well and my recent performance at the British Championships has given me a fantastic platform to build on; the next few weeks of preparation are absolutely crucial.”

Former female favourite Zoe Smith was taken out of the running with a dislocated shoulder at the British Championships last month. Smith expressed her disappointmentto not represent Team GB at the Games in an Instagram post earlier today, but wished the best of luck to Tiler in the Summer Games.

Tommy Yule, the performance director at British Weightlifting, has expressed his pride at the selection of Tiler and Webster. In a statement, Yule lauded their recent progress and personal best efforts in recent national and international competitions, stating that all coaching focus will now be on giving their best chance of performing well in Rio.

Great Britain has won seven medals in Olympic weightlifting – one gold, three silver, and three bronze. The most recent was won by David Mercer in Los Angeles in 1984. 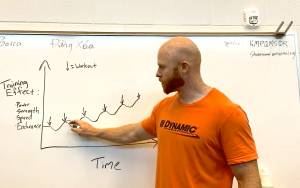